There’s a lot more to your nails than meets the eye. (Don’t believe us? Here are 7 things your nails say about you.) In fact, what you see on the surface has been in the works for a while, growing out from the nail matrix (the living tissue below your cuticle responsible for the healthy growth of your nails) that’s deep in your fingers. It’s a complicated system, and when your nails start looking not-so-hot, any number of things could be to blame—here are 8 leading contenders.

Concave or depressed nails (like the inside of a spoon) can be caused by low iron levels, or anemia. Iron helps form hemoglobin, a molecule that shuttles red blood cells loaded with fresh oxygen to your nail matrix, explains Ella Toombs, MD, a board-certified dermatologist based in Washington, DC. Without it, you get stunted nail growth.

If you see depressions in your nails, that’s your cue to head to the doc for a blood test (and load up on these 7 foods that have more iron than red meat). 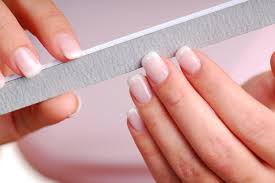 You text and type nonstop

You know that clickety-clack sound your nails make when you’re firing off emails and texts? Well, you’re damaging more than just the patience of the people around you. “If your nail is making contact with your keyboard or smartphone screen over and over, it could cause it to split, fracture, or fray at the edges,” says Toombs. (Your nails aren’t the only body part at risk. Here are 5 other scary ways your cell phone is harming your body, from Prevention Premium.)

File or trim nails so that just a bit of white tip is left (but still below than the fleshy top of your finger). That will make it possible to text and type with just the pad of your finger.

You only apply hand lotion in the morning

Time for a dose of reality—you have to reapply hand lotion every time you wash your hands. Water dries your skin out, and if the skin at and below your cuticles is dry, then the underlying nail matrix is, too. That means the nail it forms will be prone to splitting, breaking, and cracking, says Ellen Marmur, MD, associate clinical professor of dermatology at Mount Sinai in New York City.

Find a fast-absorbing lotion like Essie Spa Manicure Many Many Mani Intensive Hand Lotion ($9; target.com) and apply it throughout the day, paying special attention to the area above your matrix: from the cuticles all the way down to the second knuckle of your finger.

You leave polish on for way too long

All nail polishes contain drying ingredients that sap moisture from the nail plate and weaken it, and that drying effect doesn’t stop once the polish has hardened, Marmur says. Even five-free nail polishes, which skip the solvent toluene and the plasticizer dibutyl phthalate, along with other potentially irritating ingredients, can still leave nails high and dry (something has to make the polish dry once it’s on your nail, right?).

Toombs recommends taking polish off after five days—when most formulas will start wearing down anyway. Then give nails a few days of downtime before hitting the paint again.

You prep with a base coat

Here you are, thinking you’re doing the right thing by never skipping your base coat, and it turns out you’re wrong. Despite its name, base coat shouldn’t be your first step—if you put polish directly on naked nails, the chemicals (like solvents ethyl acetate or butyl acetate) can eventually eat away at the nail plate, making it weaker and more likely to break, Marmur says.

It’s the opposite of what happens in salons, but trust us, it works: Apply a little hand lotion to your nails before polishing. “The lotion will fill in microscopic gaps in the nail, like a primer, and hydrate it so it’s not as susceptible to damage from what you put on after,” Marmur says. Let it dry, wipe off any excess, and the polish will go on like normal.

You can’t leave your cuticles alone

Back away from the cuticle snippers. These bits of skin at the base of the nail are essentially protective grout between your nail and skin, shielding your nail from water, bacteria, and anything else you touch. “Cutting the cuticle is like removing that grout—and then there’s nothing left to prevent water from entering and causing an infection,” says Dana Stern, MD, dermatologist and assistant clinical professor at Mount Sinai School of Medicine in New York City. (Take a look at these 7 gross things that happen when you bite your nails.)

Tame cuticles by gently pushing them back with a washcloth after you shower—no cutting allowed, ever.

You might think beauty supplements are bunk, but there’s real evidence behind biotin, a B vitamin that’s widely lauded as a hair-and-nail strengthener, says Stern. A study published in the Journal of Cosmetic Dermatology found that taking 2.5 mg of the B vitamin daily improved nail strength and reduced brittleness after six to nine months. While protein deficiency is rare, if your nails are peeling at the tips or showing lengthwise ridges (both signs of brittleness), biotin could help.

Stern recommends a 2.5 mg dose of biotin once a day to reduce brittleness. Just keep in mind that takes several months to see results, and be sure to talk to your doctor before you start taking it. (Here are even more ways to strengthen your brittle nails.)

You use any old polish remover

If gasoline and grain alcohol had a liquid lovechild, we imagine it would smell like nail polish remover. So it’s not shocking that polish strippers aren’t exactly health tonics for your nails. Acetone in traditional remover strips the natural oils in your nails along with the polish, leaving you with brittle nails. “Even in non-acetone removers, the solvents can be very drying,” adds Toombs.

This is an example widget to show how the Right Sidebar looks by default. You can add custom widgets from the widgets screen in the admin. If custom widgets are added then this will be replaced by those widgets.